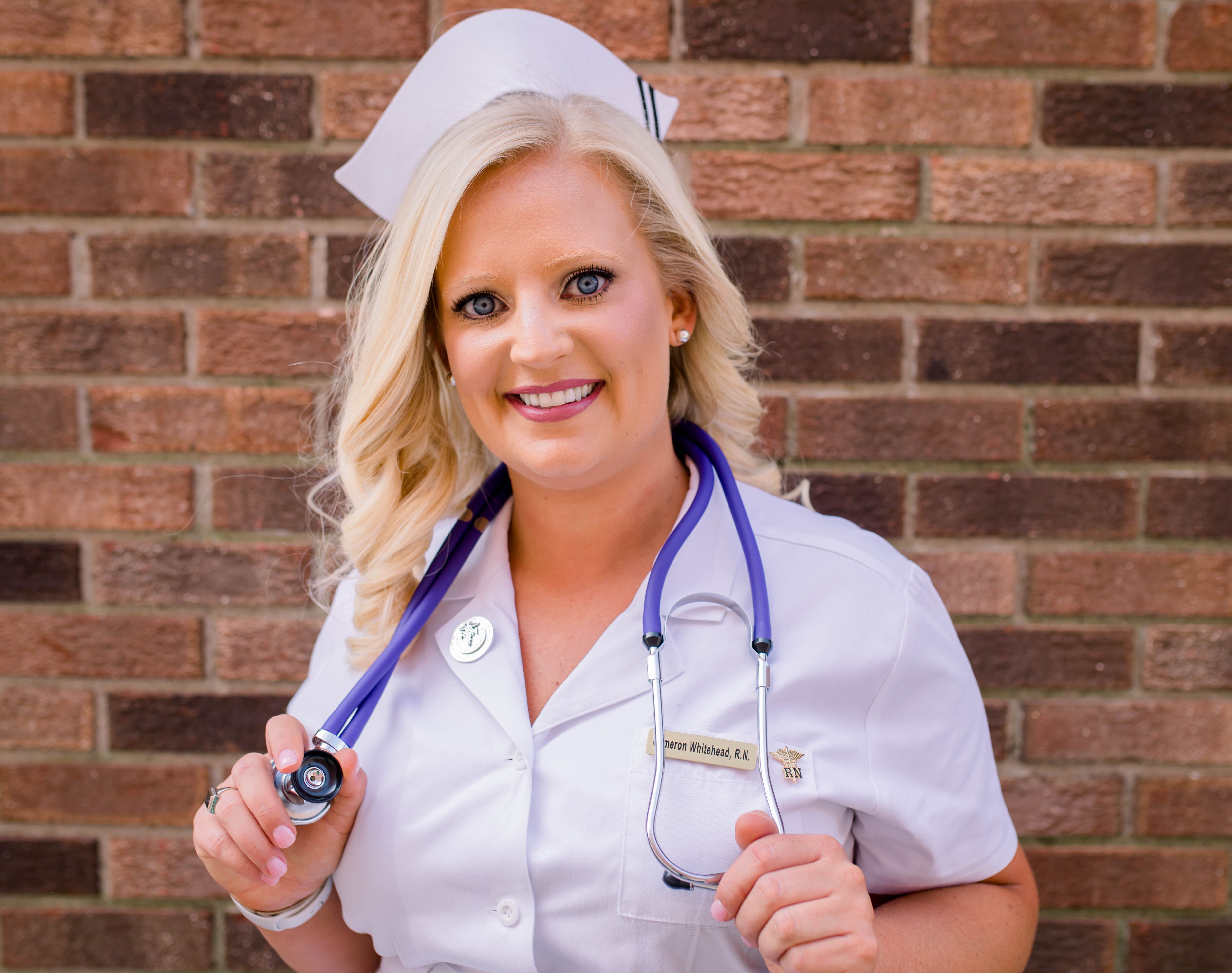 Cameron Whitehead was all set. She held a bachelor’s degree. She had a career as a teacher, following in the footsteps of her parents. Car payments, retirement benefits; she was “adulting”. Whitehead soon realized that the career enjoyed by her parents and co-workers was not making her happy, so she came to Beaufort County Community College to do what so many other students do: pivot into a new career. Whitehead followed in the footsteps of her grandmother, graduating from BCCC with an Associate Degree Nursing. She will start a Bachelor of Science in Nursing in January of 2020, and this summer, she begins work at Vidant Medical Center in labor and delivery.

“It was expected of me to go to the big university and get a four-year degree,” she says. “I worked for seven years as a high school teacher, and I enjoyed it, but I got to a point where there were some difficulties within the world of education.”

She started weighing her options: a master’s in education, counseling, or principal. “I didn’t think being in a different role would make me happy. The healthcare field has always been interesting to me, so I took a plunge.”

“I was scared to leave. I already had a degree. I had a career. I had benefits, retirement, and I left all of that, and it has definitely been worth it,” she reflects. “It has been hard; it has been exciting; it has been scary; and it will continue to be scary because I learn something new every day.”

She wanted to start out her nursing career in labor and delivery because it is highly dynamic. “When you come back for your next three-day shift, most of those patients will be gone. It’s an exciting time [for patients],” she says. “They want to be in the hospital because they’re having a baby.”

The floor is filled with energy, with 16 nurses on the floor, including fellow BCCC graduate Katie Daniels, and not a single day without a delivery. She will start on Side B, where complicated pregnancies are diverted, but she will eventually work in Mother/Baby, the operating room, Side A for healthy pregnancies, and triage for Labor & Delivery area.

“The day before I interviewed, they had ten babies in two-hour time period,” she says.

She compares her first degree, a Bachelor of Science in Business and Marketing Education, to her current Associate Degree Nursing. “College was difficult at ECU, you have to work, but it’s a different realm than what I’ve been going through here. Nursing school is 24-7 non-stop. You have to turn down family events, friends, things that I didn’t have to do for ECU. This degree is even more exciting because it is unbelievably difficult, but rewarding at the same time.”

Whitehead does not regret it. “There are so many places [as a nurse] I can turn if I start to burn out.” She says that all the educating nurses do, on topics such as breastfeeding, swaddling and medications, will offer plenty of opportunity to use her “teacher voice”, as her classmates describe it.

On one of her clinical rotations, she introduced herself to her first patient, who shortly thereafter started vomiting blood. “It was a terrifying, but educational, experience. I watched the doctors run in. All the nurses came.”

That adrenaline rush captivated her. As frightening as it was, she realized that she had the support of the entire department staff.

“Whether it’s good, bad, sad, happy, ugly, you’re going to have someone there to support you, and help you, and encourage you,” she says.

Returning to college was not a small undertaking. She took night classes for her last two years as a teacher to complete her pre-requisites.

“The hardest thing was getting everything line up,” she says. “I had to find health and vision insurance. I had to find all these things on my own. I had to sell my car so I didn’t have a payment.”

“Serena Sullivan [with the BCCC Foundation] has been amazing. She sees and hears your needs.” As a returning student, Whitehead did not qualify for the financial aid that many BCCC students can access. “I can say 100 percent, if it wasn’t for scholarships I couldn’t have made this work. I did not come out with a whole lot of savings being a teacher and paying back ECU.”

While at BCCC, she has work part-time as a substitute teacher, and has had the support of her sister and her parents, who are all teachers, with backgrounds in math, business and marketing.

Her new career makes her the family outlier. She now follows in the footsteps of her grandmother, who also become a nurse later in life. Ruth Weston graduated as part of only the third class from what was then Beaufort County Technical Institute.

“She was an inspiration for me to come to Beaufort. I walk past her picture every day. It’s my inspiration. I walk by and say in my head, ‘Mema, be with me today,’ if I have a rough test day.”

Whitehead offers a final reflection on her new path. “Don’t be ashamed to come to community college. It’s a great option financially. It’s a great option if you are someone who wants to have a smaller student-teacher ratio. I wouldn’t have the relationships that I do with our professors. They know me, they’ve met some of my family, they know my background as a teacher. It’s a very smart decision. I can tell you that you will appreciate it in the future. Especially if you don’t know what you want to do. I wish I would have thought more about it.”

As Cameron Whitehead walks into a new future, one where she will usher in the next generation, she walks with the confidence of someone with one career behind her, carrying the nursing lantern of a previous generation.