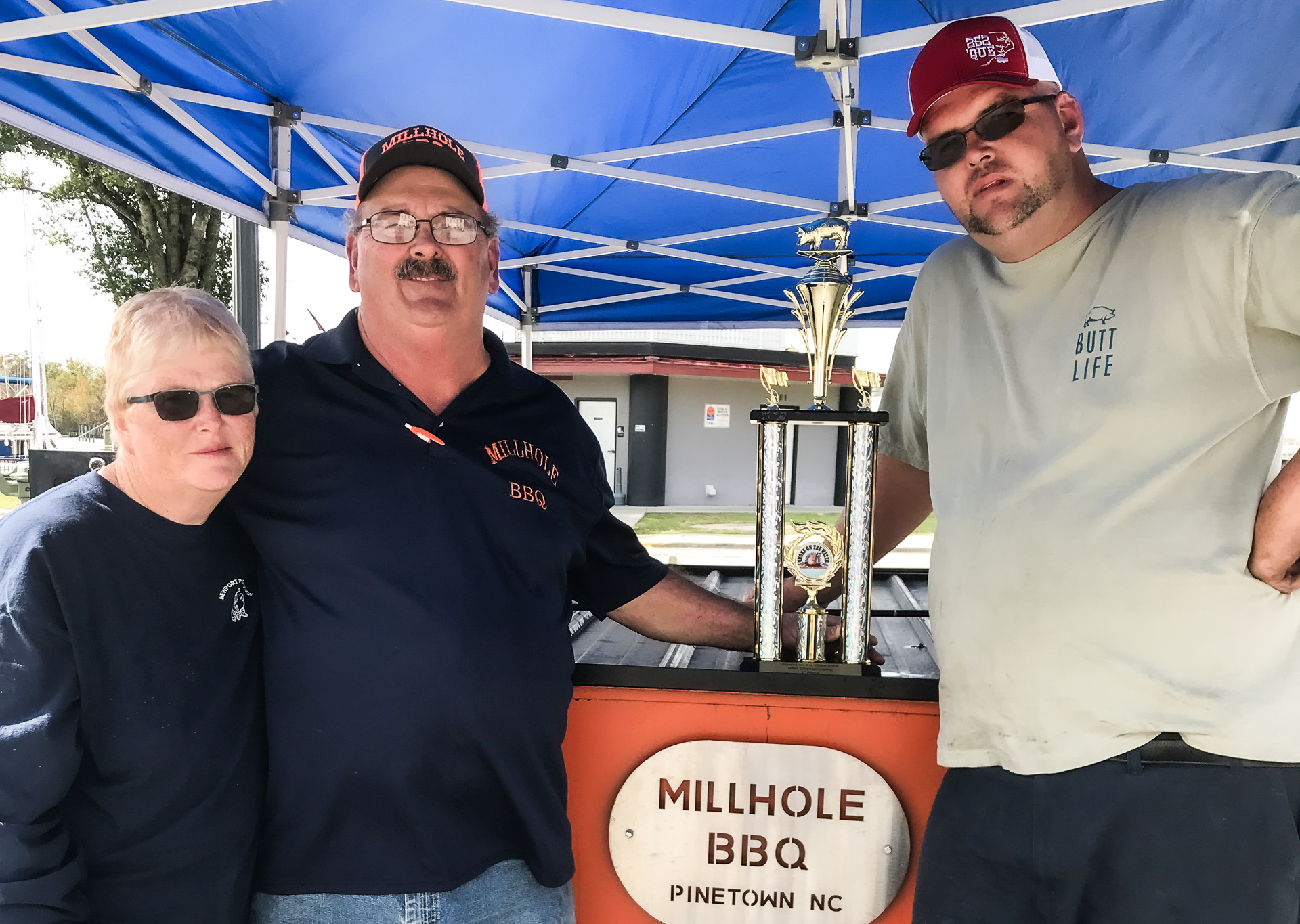 Mark Woolard (center) will be showcasing his traditional barbecue cooking skills on Jan. 30.

“Local Legends of BBQ” coming to library on Jan. 30

This Thursday, as part of its Community Voices series, the Beaufort County Community College Library will host two celebrated cooks at Community Voices: Local Legends, where Brownie Futrell and Mark Woolard will cook two pigs, one using gas and one using charcoal. Participants can sample the pulled pork and immerse themselves one last time in the North Carolina Department of Natural and Cultural Resources’ “The Story of BBQ in N.C.” traveling exhibit. The library has hosted the exhibit since December. The event is free, but limited to 150 participants who must sign up by coming to the library, calling, or emailing. The local legends will be leading a discussion and answering questions from 4:00-4:30 p.m. on January 30.

Mark Woolard is a BCCC graduate who has worked with the State of North Carolina for 35 years in carpentry and maintenance. Woolard joined his son and wife three years ago in the Whole Hog BBQ competition. They built their first cooker for the Newport Pig Cooking Contest. Since then, they have cooked in the Neuse BBQ competition in Kinston, the Buccaneers and BBQ contest in Bath, where they placed first in the traditional category, and Smoke on the Water in Washington where they came in third in the state in the traditional category. Traditional means cooking with wood or charcoal, as Woolard will be doing at the event on January 30.

Brownie Futrell is a retired Pulitzer Prize-winning newspaper publisher who now has time to pursue his passion for barbecue. He has been judging barbecue competitions for the past 20 years.

“We are excited to showcase a tradition that our cooks and so many others in our region grew up with,” said Paula Hopper, library director at BCCC. “We are pleased to have Mr. Futrell and Mr. Woolard showcase their talents at the college.”

According the N.C. Dept. of Natural & Cultural Resources, “The Story of BBQ in North Carolina” explores the emergence of hog cultivation and food made from them as a centerpiece of many gatherings. The exhibit looks at the different sauces, looking at the similarities between the eastern vinegar base and the western tomato ketchup-enhanced.

Funded by the N.C. Pork Council, accompanying educational materials include STEM-based activities, a "Healthy Helpings" board game and a play kitchen for the youngest visitors to explore healthy eating options.

This is the second food-based Community Voices event the library has hosted recently. In September, its Community Voices presentation focused on church cuisine and brought together area churches to discuss the connection between food to faith.

In order to sign up, participants must call 252-940-6282, email library@beaufortccc.edu, or sign up in person at the library.

BCCC Board of Trustees rescheduled to Aug.11

How can you take university transfer classes?

BCCC moves to remote learning for many courses