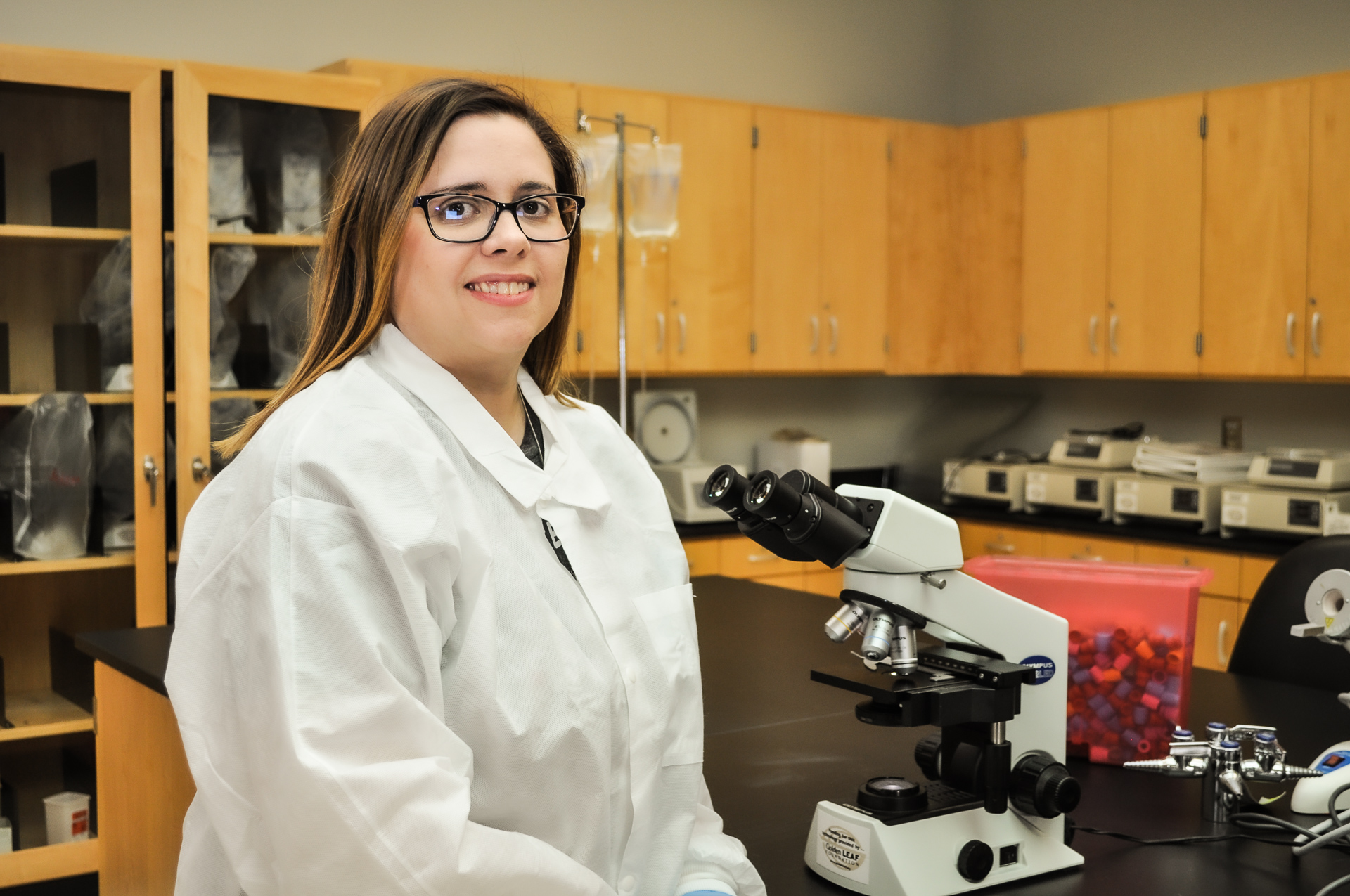 Kira Rosario came back to Beaufort County Community College to pursue a career that spoke more to her passion for science and medicine.

“I wanted something I could grow in,” says Kira Rosario, who is attending Beaufort County Community College for the second time. “Something shifts, and you want to know that the things you’re doing in life are actually leading you somewhere.” After an unimpressive first attempt in 2008, she went to work and eventually landed a steady job. When that job lost its luster, Rosario returned to the college with her eye on a career in medical laboratory technology, bringing with her a decade of wisdom.

She needed a different approach than her first attempt at college. “I didn’t really have a plan,” she reflects. “I was fresh out of the army. I felt like I was supposed to use my G.I. Bill, go to college, except I had no idea what I wanted to do for my future. I wound up having a lot of damage to undo.” She failed classes, exhausted her financial aid, and had no degree to show for it.

She worked in food service and bartending, and eventually landed at the Beaufort County Water Department, where she worked for five years. While it was a great full-time position, she did not see room for advancement, and she had goals of travel and home ownership.

“I wanted love what I do, and water just wasn’t my passion. I wanted something more medical,” she says. “I looked at all of the local community colleges, and looked at each of the programs they offered. I kept coming back to the lab tech program.” She drew her inspiration from shows like ER.

She applied for the Post-9/11 G.I. Bill, which opened her up for to additional three years of college.

“That’s really the only reason I was able to come back to school,” she says. “Doing it in your early twenties is a lot cheaper than doing it in your early thirties when you have all kinds of responsibilities.” Rosario had the support of both her boyfriend and her amazing mother, who was happy to supplement any financial aid shortfalls.

Now in her final semester of clinicals in the program, she speaks enthusiastically about her experience with urinalysis, a key tool of a medical lab technician. “Most urine is fairly clear, but sometimes you get a sample that is brownish-red, and you know something’s going on. You put it in your analyzer. It tests it on the macro- and microscopic level. We then have to create a slide and look at it through a microscope to confirm what the machine said. There are times you will look under, and it’s just RBCs [red blood cells]. It’s fun because you’re get something different every time.”

Rosario’s wants to shift her analytic skills into oncology. She plans to finish a Bachelor of Science in Clinical Laboratory Science from Winston Salem State University online. She then plans to complete a master’s program to become a physician’s assistant. Her aforementioned amazing mother is already helping her price out the program so they can budget appropriately.

The clear plan is very different from her first college experience. “I didn’t care so much about making As. As long as I was passing the class, I was fine with that. This time around, I’m striving for As. A B is okay. A C would devastate me. For me in my thirties, I have a better sense of self, and I know what I want out of life, and I know what I need to put in to achieve that. It’s all on me. No one else can do it for me. If I don’t do it, it’s never going to happen.”

“You can’t compare your progress to other people’s because everyone’s life is a little different,” she reflects. “You need to do what makes you happy. And if you don’t know what you want to do straight out of high school, then don’t go to college. Work. Try to figure out what you’re interested in. If you do damage to your GPA before you really know what you want to do, then when you finally figure it out, you first have to fix your past mistakes.”

“It eventually works out. You just have to keep trying. Maybe it’s not right for you in your early twenties. Maybe there’s other life experiences you have to go through first. You just have to be open to what the universe is going to throw your way. You can have a plan in mind. Nine times out of ten, that’s not the way it’s going to go. If you can roll with the punches a little more, you might end up somewhere you might not have expected, but it might be right where you need to be.”