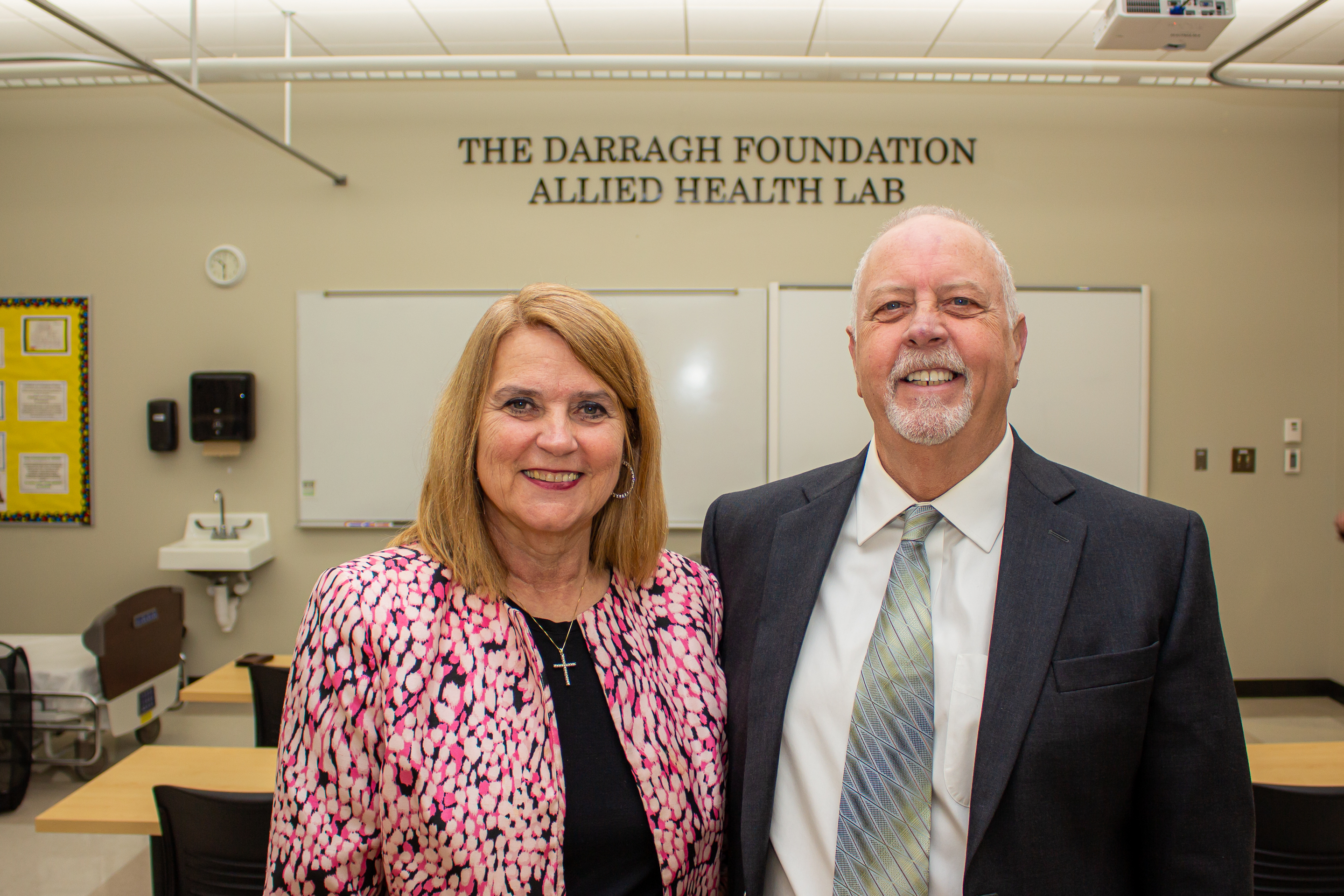 Gordon Darragh (right, with wife Kim), President of The Darragh Foundation, has made funding for short-term workforce students and the testing for GED students the priority of scholarships at Beaufort County Community College.

Beaufort County Community College dedicated an allied health lab in honor of the Darragh Foundation on April 27. The naming acknowledges a new generous donation from the foundation. The Darragh Foundation Allied Heath Lab is located in the Katie Paul Nursing & Allied Health Building and hosts classes for nurse aide students.

In 2018, The Darragh Foundation began offering scholarships to students in the Division of Continuing Education. Since then, the foundation has supported 142 students, with an average of 42 scholarships every six months. Students receiving scholarships are enrolled in programs such as heating, ventilation and air conditioning technician, nail technician, pharmacy technician, phlebotomy, emergency medical technician, residential wiring, and commercial driver’s license truck driver.

The Darragh Foundation’s mission is “Helping to Improve the Lives of Others.” The foundation’s first scholarship at BCCC was awarded to a curriculum student. During the process, Gordon Darragh, President of The Darragh Foundation approached BCCC administrators about additional opportunities for helping students. After conversations about how to make the largest impact in the lives of the most people possible, Darragh decided to focus on scholarships for students enrolled in short-term training programs and the GED program. These programs can help people already in the workforce or with family obligations quickly access new positions and earn a more sustainable wage for themselves and their families.

“I’ve got 142 hand-written thank you notes,” said Darragh. “If I’m sitting in my office or I’m having a bad day or things just aren’t going well, I’ll pull them out and start reading through those thank you notes, and it’s so heart-warming and it grounds me. It brings me back to Earth when I realize what I’m doing.”

The Darragh Foundation was founded by Gordon’s father Richard who retired from Proctor & Gamble. “He had five children, and he wanted to teach each of us the art of giving in our own communities,” said Gordon. Richard handed the foundation over to Gordon eight years ago.

The foundation plans to increase its giving to the college by a third. It has become an integral part of the Beaufort Promise, complimenting state and federal funding to guarantee access to education to all students who want to earn a GED or credential.

BCCC updated its naming policy to include classrooms and laboratories, whereas previously only buildings were eligible. For questions regarding contributions and naming rights through the BCCC Foundation, contact Serena Sullivan, VP of Institutional Advancement, at serena.sullivan@beaufortccc.edu or 252-940-6326.

Class of 2022 Nursing Students Celebrate with Families and Friends