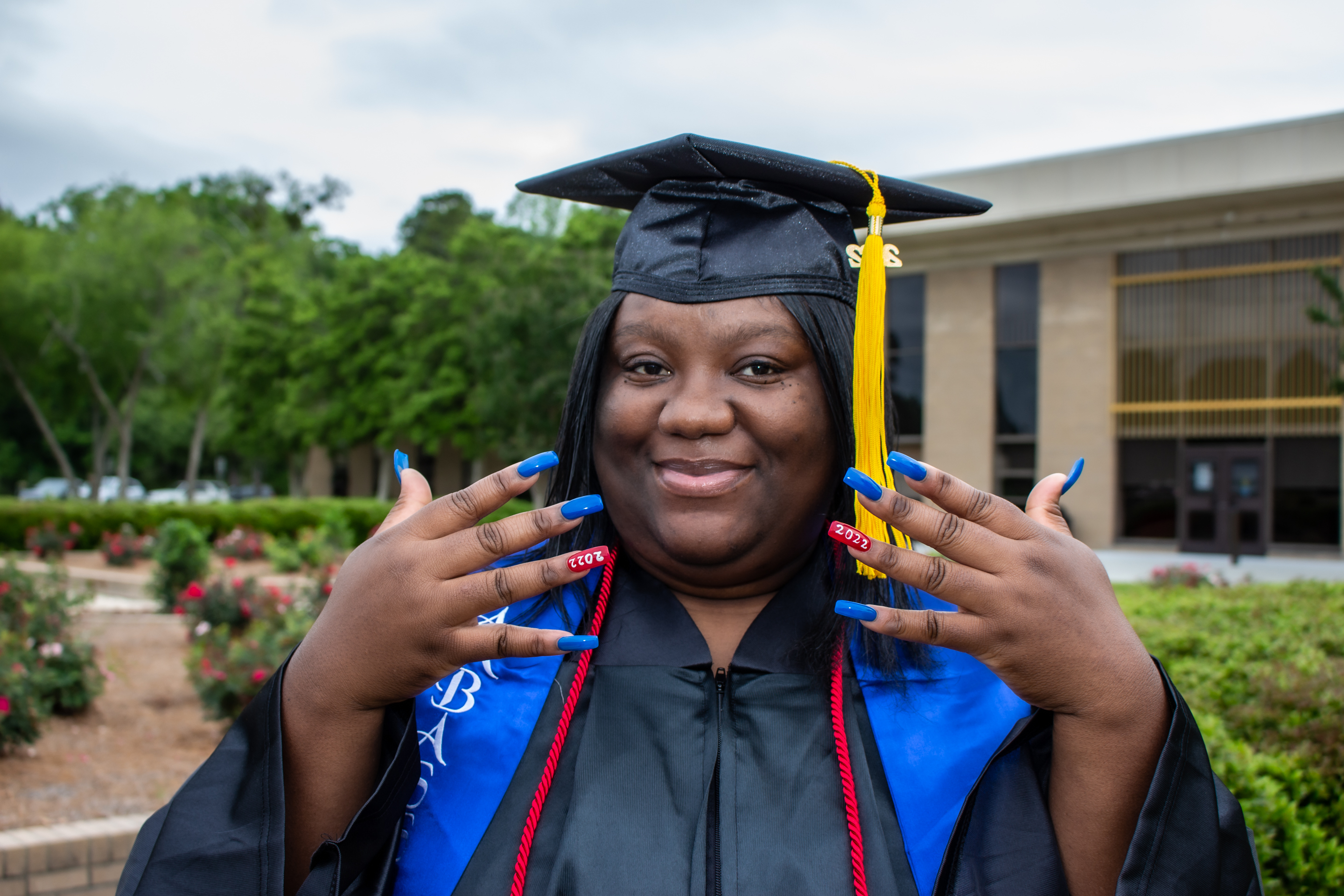 Iesha Smallwood graduated on May 12 with an Associate in Arts, but this moment was not guaranteed for her. After earning one associate’s degree, she came to Beaufort County Community College to pursue her real passion of counseling people experiencing mental illness, working through her own challenges in the process. She heads to East Carolina this fall to pursue a Bachelor of Science in Psychology, with plans to earn a master’s degree and start her own practice.

Initially pursuing her childhood ambition to become a lawyer, Smallwood earned an Associate in Applied Science in Criminal Justice Technology online. But shortly after, she gave birth to her daughter Journey and suddenly her plans had to change, so she traded her career to become a full-time mother.

It was later as her daughter was older, and her own mental health deteriorated that she knew she had to return to school to pursue an aspiration she had long held to work in the mental health field.

“For years I didn’t really know what my purpose was until life happened,” she says.

She speaks passionately about taking mental health seriously. “When I look around in society, I’m disappointed,” she says. “People push it back. There’s a stigma around mental health. I’m trying to change that. I’m trying to make a change for the world, especially for my race. I’m trying to see it from a different perspective. I want to help people.”

She sees a double standard around the issue. “I compare it to a physical illness. When you’re diabetic or have high blood pressure–those things can be reversed. What’s the difference with mental health? If you’re willing to take medication for diabetes and blood pressure, what’s wrong with taking medication and therapy or receiving help for mental health issues? It’s clear as day. It’s an issue at hand in society. The suicide rate is going up tremendously.”

According to the Centers for Disease Control, the suicide rate has risen 30 percent in the last 20 years, and deaths of despair, including suicide, drug overdoses, and alcoholism, have contributed to a consecutive three-year decline in life expectancy in the United States.

“When it’s a mind thing, you can’t turn it off,” Smallwood says. “You can’t say ‘okay, I’m depressed for one day, let me turn it off for the next day’. That’s not how it works.”

“I want people to be more open and understanding that mental illness is real, mental health is very important, and it can ruin your life in different ways,” she says. “If I need to tell my story or go above and beyond to help people, I’m willing to do that. I’m not ashamed of my past or my struggles.”

She eventually wants to own her own practice where she can help people work through struggles similar to her own and grow. She is willing to take her practice out into the community to meet people where they are at.

“A lot of therapists and psychologists can’t relate to their patients’ issues,” she says. “They understand it in book form, but not from a life perspective. If I’m helping someone, I would be able to help them in every way possible.”

She knew that mental health was the field for her, and others had told her that she would be great. She prayed on it, and thought about it, pushing past doubts about juggling education with motherhood. Having started her first degree later, she knew there was no time to waste. If she wanted to help people, she would have to push through it.

“I’ve come a very long way when it comes to school, motherhood, womanhood, growth, prosperity,” she says. She pushed through two and a half years with no breaks. “I’m fortunate enough to say I made it.”

Her six-year-old daughter helped motivate her through her education. “Journey, she’s my backbone. I want her to do great things in life. I want her to look at her mom and say, ‘she’s not perfect, she has struggles, but my mom is in college.’ She even brags to her teachers that I’m in college.”

She calls her aunt, after whom she is named, her guardian angel. “She’s always by my side during the good, the bad, the ugly. When I’m up she’s there, when I’m down she’s there.” She is one of the many family members who supported her through her education, and cheered her on when she was accepted to East Carolina University.

Some of her support even came from her followers on social media, who were the first to notice changes in her and reached out to her.

“A lot of people have never me aside from social media. A lot of people on that platform have been there through a lot. They have seen me blossom into the woman I am today. They always uplift, reassure, acknowledge how far I’ve come.”

In contrast to her first college experience online, she immersed herself in college life and hands-on learning at Beaufort. She was part of Gamma Beta Phi, the honor society. She was selected to be an ambassador for the college. She also joined TRiO Student Support Services, which aids students who meet certain criteria with tutoring, cultural experiences, and college tours, helping them to envision steps beyond community college. Coming in as an older student, these programs helped her connect with new people.

Through community support and her own perseverance, she crossed the stage at graduation, head held high, before moving on to the next step in her education.

As she is fond of saying, “I had to save myself from myself.”